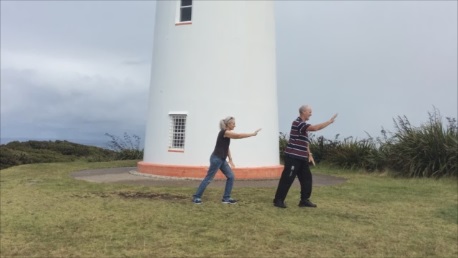 When I was a kid I had two left feet. I was good at sport but anything that required grace, timing, co-ordination and balance was not an option for me, or my sister for that matter.

You see both Jacqui and I cannot tell left from right. When we were forced to learn dancing at school, Jacqui would wear a green ribbon in her hair on the left side and I would wear my watch on my right. It didn’t help as we were always a couple of seconds behind the rest of the class. When they Dosey Doed left, we Dosey Doed right.

Jacqui still has nightmares about bruised toes so when I rang her in Australia three years ago to tell her I had started Taoist Tai Chi® practice back home in New Zealand, she was incredulous to put it mildly. I admitted that it was a challenge but I was determined to hang in there.  When Jacqui came home in 2014 I had been doing tai chi for one year, gaining strength, co-ordination, balance and confidence. I cajoled Jacqui into coming to a class and she was blown away. She confessed she was amazed at how graceful I looked, and she was struck by the friendliness of the class and instructor Kathy’s relaxed teaching style.

I gave Jacqui my blue tai chi shirt to take back to Australia with the proviso that she start tai chi when she got home. Luckily a beginners class was starting in Townsville that next week. She rang after her first class and talked for ages about how amazing and hard she had found it. She was hooked.

Over the next few months I had to remind her, time and time again, not to worry about remembering the moves, or getting it right, of being perfect. I can still remember when she rang to tell me she had got right through the set, except for the start of Fair Lady. The best thing for me was when she also said she had decided not to worry about the moves and that tai chi was a work in progress.

So when Jacqui arrived in New Zealand earlier this year, I organised a special tai chi treat as part of her holiday. My plan was for us to do tai chi together on a beach as the sun rose on the east coast of New Zealand. I figured it would be cool to be the first people in the world, on that day, to practise tai chi. We practised for several days on an abandoned wharf, in front of a cliff lighthouse, and in a rain forest as our brother videoed us.

So at 5.30am on March 21, on the beach at Te Kaha, as the sun rose over the sea, my sister and I were more than likely the first people in the world to do tai chi. It was an amazing feeling.

Tai chi has been a wonderful addition to my life and it has helped both Jacqui and I overcome a lifelong barrier to trying something new. We both feel taller, calmer, fitter, stronger and more flexible.