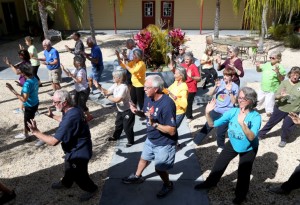 On Friday, March 18th, the Tampa Bay Times will run the following article with an online video of the work being done at the International Center Florida, Fenway Hotel and the Society.

Even during its latest 10-year stint as a vacant building, the historic Fenway Hotel has remained a community icon. And soon, it will be a functioning one.

The 1920s Mediterranean-style building at 453 Edgewater Drive has been a hotel, a college and a campus for a university. And early next year, when its restoration is set to be complete, it will be open to people from around the world as the international headquarters for the Taoist Tai Chi Society of the USA.

Bill Sweetnam, a council member for the society’s Dunedin branch, said the $12 million project, which started in July 2015, has taken longer than anticipated, but only because it’s been done correctly.

„There aren’t many historic hotels left in the county, so we are proud to be using this building the way we are,” he said. „We wanted to go about it the right way, so we are building it from the inside out.”

Society President Pegoty Packman said the project is one not only of renovation, but restoration, because construction plans have focused on transforming the structure’s decrepit interior while still striving to maintain the integrity of its iconic exterior.

„This building is a big part of the history of this area, and the community felt strongly about that,” she said. „It is not only a historical property, but a very important historical building, and that is something of significance.”

She said although the hotel’s inside will look and function differently than it has in the past — as a gathering place for society conferences and programs — its outside will continue to stand as is, as a tribute to Dunedin’s history. She says even the original Fenway lettering on the front of the building will remain.

Robin Reardon, the society’s project manager and president of its Dunedin branch, said workers are really „building an entirely different structure inside the existing structure.”

„The original intention was to keep the exterior but completely gut the interior, and that is what we have done,” he said. „It’s still going to be the Fenway at the end of this — that’s not going to change.”

He said the only changes to the outside — the replacement of all 520 windows with high-impact glass and a new coat of the same color paint — are more like updates because they won’t change the classic look of the original hotel.

„But because the exterior of the building is not very well reinforced, we wanted to be certain that what we did on the inside was structurally sound,” Reardon said, adding that all framing is being done with southern yellow pine, a material known for its strength.

Packman said the quality materials alone are a testament to the city and its residents.

„We see the strength of the building in physicalness being the strength in the community — it’s all the same,” she said.

„This is our legacy to future generations… Restoring the building not just for tai chi, but for the community of Dunedin.”

When the building is finished, it will be a meeting place for tai chi students and instructors from around the globe. While tai chi classes will still be taught in one of the society’s existing buildings behind the Fenway property, the restored building will have 80 rentable rooms, a kitchen, a 3,000-square-foot dining hall and a meeting area, which will be available for other local organizations to use as well.

„These facilities are for the whole community,” Reardon said.

Packman said even the hotel-style rooms may be available for public rental when they aren’t being used by guests who are in town specifically for tai chi programs.

„We really feel the support of the community, so we want to include them however we can,” she said. „I think people are happy to see (the Fenway) becoming alive again.”

Although the society previously held classes at the Hale Activity Center and at a spot on Main Street, Packman said the tai chi community had never fully connected with the city as a whole. And some Dunedin residents didn’t seem sure about the project when the society bought the $2.8 million property in June 2014.

Commissioner Deborah Kynes said she is happy to finally see a „true historic preservation” in Dunedin.

Commissioner Heather Gracy said she couldn’t be more pleased with the society’s „responsibility and hospitality.”

„They wanted to ingratiate themselves into Dunedin, and I think they have done just that,” she said. „They have opened doors for us and welcomed the community in. It has already proved to be a terrific partnership.”