It was a warm and sunny day as almost 80 participants and guests arrived to celebrate the Collingwood branch’s 20th Anniversary at its Creemore location. For the past 8 years Creemore has hosted a potluck and tai chi evening.  This year, the evening also included a walk down memory lane with a slide show presentation of 20 years of photos, past and present. To set the stage the room featured a wall displaying 20 years of Collingwood T-shirts. 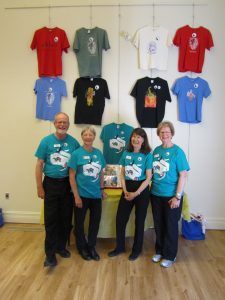 Months earlier a call had gone out to all the Collingwood branch locations for photos, and in the usual tai chi fashion participants responded generously! Hundreds of photos flowed in…so many that the biggest challenge was to decide which to include and which to set aside for another day!
The presentation included photos of events at the various branch locations, including demos, workshops, our health recovery program, summer BBQ’s, holiday gatherings, and anniversary celebrations. It also included photos from outside the branch as Collingwood participated in different regional, national and international gatherings such as Awareness Day, CIT week, banquets, work parties and various workshops. Included in the mix were a lot of photos of people in kitchens in Collingwood and Orangeville!
There were a lot of smiles and laughter as the slide show was presented. Newer participants were given insights into what the Collingwood branch and the extended Fung Loy Kok family were all about, and longtime participants had the opportunity to remember many good times.
After the kitchen clean-up there was still time for a group photo and a final set outdoors, accompanied by the gentle splashing of the village fountain. 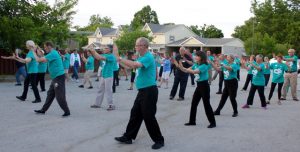 As Collingwood’s various celebrations take place, we continue to take photos to add to this slide show, so that in the end, we will have a lasting reminder of how our tai chi family has grown and evolved over the past 20 years. And, as we all know, the next 20 years will be even better!