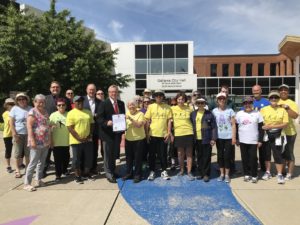 This was a big event for the Durham location of the Toronto Branch.  We were a large presence on the Civic Square in front of Oshawa’s City Hall, with representation from the Toronto Branch, and from each and every location in which we provide a Taoist Tai Chi® arts class – Uxbridge, Pickering, Bowmanville, Whitby and Oshawa.  The weather could not have been better, and following the proclamation and one final set on the square, we retired to our Thornton-Dundee location for our annual picnic and a fun afternoon of festivities.