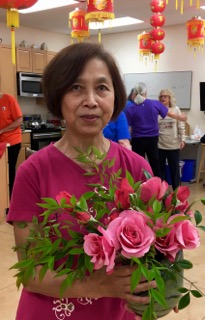 Many hands made light work with a delicious potluck luncheon prior to our monthly San Francisco Bay Area branch class and council. The luncheon was to thank instructor Sue Vo and wish her a safe journey to her new home in Southern California. Sue embodies the Taoist Tai Chi® understanding of volunteerism.

After the lunch, our branch historian and photographer gave a short speech as follows:

“I have been reading this book on Taoist Tai Chi® Society locations in the U.S. and how they originated.

Buffalo, which was the first location in the U.S., started because a member from Buffalo would travel to Toronto and take classes with Master Moy. After becoming an instructor, it was decided and encouraged that he start a location in Buffalo.

Master Moy said to another instructor who was moving to Texas, 'Texas is a big state.  You’re in charge’”.

Taoist Tai Chi® has grown, not just in the U.S., but also worldwide because of an instructor who moved to that location and continued on the tradition of volunteerism.

Sue then talked about her long journey to America and to Taoist Tai Chi®. In 1978, Sue, her husband Thinh and their villagers escaped Vietnam in a boat that the village built. They were asea for 8 days until they reached Malaysia. There were over 70,000 boat people who made this voyage. After Malaysia Sue and her husband were in Germany for 6 years until immigrating to Miami then Utah and, finally, to our great good luck, the San Francisco Bay area. Sue was always very physically active until she injured her foot playing soccer. After 18 months of physical therapy with little hope of full recovery, Sue discovered Taoist Tai Chi® 5 years ago. She has been an instructor for three years. She credited and thanked every single Taoist Tai Chi® instructor. Sue said, “I don’t know if I’m a good instructor but I had lots of great instructors.”

Sue will practice at our San Diego location, which will be a two-hour drive both ways. Please visit the San Diego branch and ask Sue to tell you more of her amazing journey.

We will see her at the San Francisco Bay area branch’s June 3-4 workshop and 20th anniversary. We hope to see you too.