Meanwhile, a short distance south of downtown, the Taoist Tai Chi Society is deep into its formidable rehabilitation of the 1920s era Mediterranean-style Fenway hotel property on Edgewater Drive (Alternate 19) it bought three years ago for $2.8 million. The interior has been gutted and the structure is being reinforced where needed, society President Pegoty Packman said.

“It’s now down to bare bones,” she said.

Once completed, the Fenway will run international programs and workshops throughout the year, drawing anywhere from 150 to 200 people to 700 or more, Packman said. The Taoist international headquarters in Tallahassee also is poised to move into the Fenway when it opens. 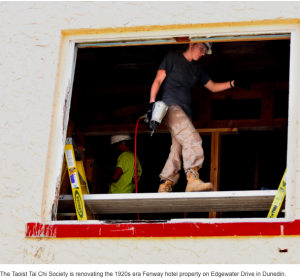 In the meantime, the society is hosting events from its headquarters behind the Fenway, and plans a two-week program in November expected to bring in 200 people from 27 countries, Packman said.

From an article in the St. Petersburg Tribune >