My name is Pat and I have been a member of the Taoist Tai Chi Society of Great Britain for 15 years and an instructor for 10 years.

5 years ago I had an accident in my car. I woke up just as the airbag was deflating and because the car was tipped on its bonnet (hood) in a hedge all I could see out of the window was the tarmac road surface.

I could wriggle my toes but could not feel my upper legs which was a strange feeling as though my feet were floating in mid-air. I couldn’t move my arms much.

My main concern was that I was not breathing. I tried taking deep breaths and sucking in air but that didn’t seem to work. I thought about my Tai Chi training and how, when doing Dan Yu, it worked on the diaphragm and wondered if that would get my lungs working. I couldn’t move so I just concentrated on flexing my arms and the muscles in my lower chest and pushing with my feet. It took a couple of goes but eventually it worked and I felt my lungs fill with air, albeit painfully. 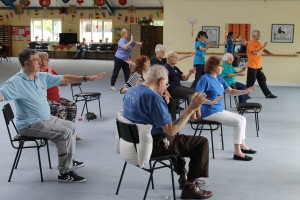 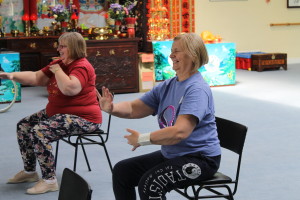 I found out afterwards that I had 5 broken ribs and a punctured lung but the main reason I couldn’t breathe was because of the angle of the car. My full weight was suspended in the seatbelt harness so there was no way I could breathe in through my upper chest. If I hadn’t known about the action of the Dan Yu working lower down on the diaphragm I would never have taken a breath in the normal way.

When the ambulance arrived I was given painkillers, the Fire Brigade cut me out of the car and I was transferred to Hospital by Air Ambulance but I don’t remember that because by then I was again unconscious.

After that initial event Tai Chi has continued to help with my recovery. I was given an exercise in hospital, which I thought of as a Dan Yu whilst laying on my back and aided by a machine.  It is possible to do the set sitting down so after 2 months in hospital I attended a Health Recovery class.  The folk in that class are the hardest working people I know. They will struggle for months just to be able to lift their arm or foot a few inches. Not only are they trying to cope with their illness or disability they are struggling to learn Tai Chi as well. Like many people they do not start their training until they have a problem. I consider myself very fortunate that I had some knowledge to help me and I was able to adjust the moves to suit my ability as we all do in our own way in class.

How often in class does the Instructor say ‘How does that feel’? I have asked it myself many times and we are all encouraged to answer for both our benefit and for the benefit of our class mates.  Little did I realise that even that would be useful.  I lost count of the times that doctors asked exactly that and I was able to give clear articulate answers. I am not sure if it helped them to understand what was happening but it made me feel better to think that although I was flat on my back in bed at least I was doing something helpful.

But Tai Chi is not just about the movements it’s also about the people. I had so much support and good wishes from friends all over the world. When I was in hospital, 45 miles from home, members form the local branch came to visit and offered help to my husband and family. At a time of trauma for them it was most welcome.

So if you are thinking of starting Tai Chi don’t put it off. I urge you to start now – because you never know when or how the insight you gain might be very helpful. 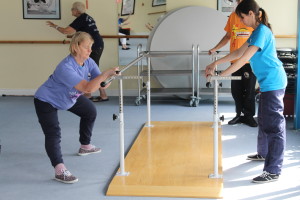