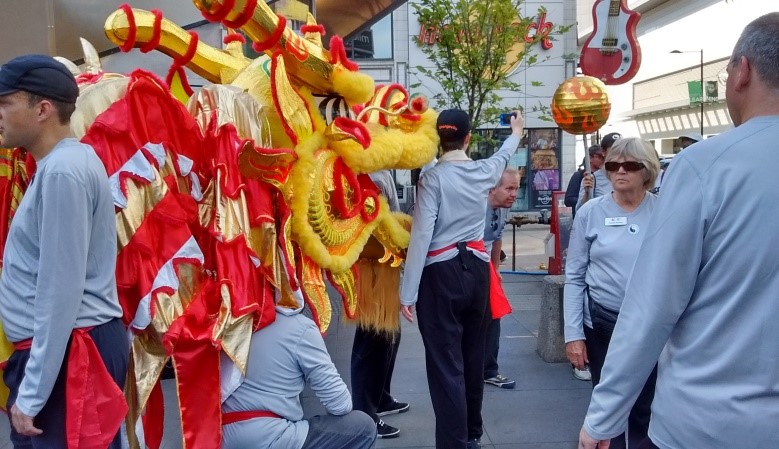 Opportunity to ParticipateThis past CIT week was the 7th time I have participated in the dragon dance at International Awareness Day.  I saw the signup for a practice in the lobby when I got to the International Center Orangeville for my first CIT week in 2010. I was surprised and pleased that the only requirement was the willingness to take part.  We perform at International Awareness Day with a lot of people who have had only one or two sessions of practice and our performance isn’t going to win any prizes, but in the organization the opportunity for the participants to learn is more important.  Dragon dancing is more strenuous than doing a set of tai chi, but you certainly don’t need to be a trained athlete. Having lots of extra people gives more people a chance to participate and ensures that everyone can take a rest before they get too tired.  The first year I was a dragon leg I realized that I hadn’t done any running at all for a long time, so I did some jogging practice for a few months before the next CIT week.  I find that the ability to jog for five minutes is more than sufficient for an ordinary dragon leg.  (Special positions like head and tail are, to be sure, more physically demanding.) Dragon Dancing and Tai ChiThe dragon dance is good tai chi practice.  I have learned a lot about pushing from the feet in the danyu and the toryu, especially from the wave move, where the dragon is dipped using a toryu (or a snake for the Pearl and the head) and then pushed up and the hands changed at the top.  The power of a grounded push from the feet makes that exchange possible.  The way the segments can interact as the pull moves down the body of the dragon is a good illustration of the way the parts of the body can pull each other in the movements of tai chi.  As with sword and sabre, working with a physical object as an extension of the body can give us insight into the set. CooperationBeing part of the dragon team is a great way to learn about cooperation. Since the Interntaional Awareness Day team includes a lot of inexperienced people, we get to experience the great difference between working with people who understand how the successive segments help each other and working with those who haven’t figured it out yet.  For all segments except head, neck and tail, you let the person in front pull you and you pull the person behind you.  You are aware of them at all times and make adjustments as needed.  In the tight turns of the zigzag, you give the person in front a bit of slack to make the turn, so they can pull you around but don’t have to work too hard to do it.  If you are getting tired, you call for a replacement.  If you are a replacement, you watch for people looking for a replacement and for possible hazards on the ground or overhead. Dragon TeamDragon LeadersThese people design the choreography of the performance and train the participants to perform it.  They ensure that there are enough people for the special positions including replacements and that they have adequate training.  They manage the logistics of training and of transport of the equipment and the team to and from the performance location.  They are responsible for the safety of the dragon team and the condition of the dragons.Special Positions So, for a 22-leg dragon, you need the six special positions (pearl, head, neck, tail and two flippers) and 17 ordinary legs. You need seven replacements for the special positions plus enough replacements for the ordinary legs so that no one gets too tired. Seven ordinary leg replacements would give a total of 37 people on that dragon team. Equipment A dragon comprises the Pearl of Wisdom, a stand for the head, red sashes to identify the members of the dragon team and, of course, the dragon. Dragon Moves The approximately 15-minute small dragon performance that we have done in previous years included zigzags with dips, waves, spirals, three pretzels in a row, and two stairs, north and south, where the dragon does a stair facing in one direction and then runs to the opposite side of the performance area and does a stair facing in the opposite direction. Awareness Day 2016This year we did not have enough people to take both a large 50-leg dragon and a smaller dragon to International Awareness Day so we took two smaller dragons, a 22-leg and a 20-leg.   I thought this worked out very well.  We had plenty of replacements on a particularly hot day, and could have one dragon perform while the other one rested and got water.  The big dragon only performs a few figures and spends most of the day lying around, so people who would normally be on the big dragon got more opportunity to perform.  So although the big dragon is very impressive, I think that in the future we could design double dragon choreography for the two small dragons playing together that could still be very impressive and provide a better experience for the dragon teams.   How about a double pretzel? Or some samba music choreography?In addition, the two smaller dragons were much easier to transport than a small and a large dragon.  Due to the complexity of loading the big dragon, it took us about a quarter of the time to load just the two small ones.