There were tables and chairs set out across the room and the March Hare and the Hatter were having tea. A somewhat mad affair in Lewis Carroll’s version, but in Nelson, New Zealand, it was quite civilised – the Queen of Hearts didn’t shout “Off with his head!” 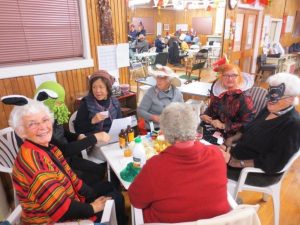 A huge amount of work went into preparing for the quiz night fundraiser, with questions formulated months in advance, helpers on the night collected the answer sheets at the end of each round, score-keepers kept a tally of each team’s successes. Spot prizes were given to keep the more than 60 participants encouraged and, in the true spirit of Taoist Tai Chi® practice, the winners on the night even put their prize up for auction and raised a further $50 for the national travelling fund.

With more than $1100 in donations by the end of the evening, it was a wonderful event.  A very tired little Dormouse was heard to mumble something about it being the very best chai tea party she’d ever been to!