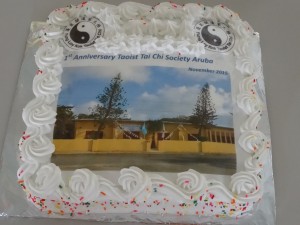 After attending the the Lok Hup workshop at the Fenway, I travelled, via Miami, to the Caribbean island of Aruba for the First Anniversary of the centre there.

Irena the President and other members told me about how they had raised funds for the new building over the last 17 years.

They all seemed so happy with their home to practice the Taoist Tai Chi® arts and told me about how the materials had been imported, due to the lack of local supply, mainly from Holland. The building was formerly a large Japanese house which required a lot of renovations but the perimeter walls are virtually unchanged.

There was a great feeling of excitement and anticipation before the workshop and everyone was willing to help get everything ready, including putting up the Christmas lights.

There are only a few workshops in Aruba and what stood out for me on this visit was the importance and value of these workshops and intensives and the unconditional willingness of the members to learn together and improve.

The people of Aruba are very kind and generous and full of laughter. Perhaps that is why the slogan at the airport reads “ One Happy Island ”.