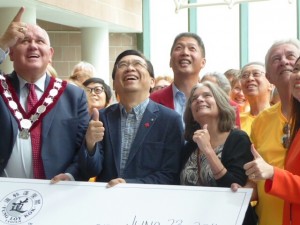 Fung Loy Kok Institute of Taoism has been thanked for its “incredible dedication and commitment to other peoples’ needs” in a ceremony  marking the completion of its CAD$100,000 donation to the Fort McMurray wildfire appeal.Markham Mayor Frank Scarpitti said the institute’s help for “men, women and children you’ll never meet is the highest form of service to humanity”.[gallery ids="5130,5134,5131,5132,5133,5135"]Mr Sciatti and other council members from the city of Markham, where FLK has built its award-winning Taoist temple, Wong Dai Sin, attended the cheque presentation ceremony, along with Canadian Red Cross past-president Kai Tao, and FLK president Marsha Eberhardt, director David Frame, and executive director Andrew Hung.  Many FLK participants were there wearing their 2015 IAD shirts; making a colourful backdrop for the media photographers and television cameras.Ms Eberhardt mentioned that all Canadians’ hearts go out to people affected by the wildfire in Fort McMurray, Alberta. FLK truly appreciated the generous support from participants, with donation boxes set up at all divisions across Canada and special fundraising intensives or classes held at each location.She noted that the institute had opened Wong Dai Sin temple in Markham city, bordering Toronto, only one year ago. Now FLK hoped to build a seniors residence in Markham. Ms Eberhardt said it was a project that had been in our hearts for many years and she hoped FLK and Markham could work together to bring it to fruition.Mayor Scarpitti said FLK would always be welcome in Markham and the city looked forward to working with the institute on building a seniors centre there.He said FLK had been an incredible inspiration and “demonstrated compassion in our community; thank you so much for caring”. It spoke to “the essence of your teachings”.Canadian Red Cross past president Kai Tao praised the institute for its steadfast work and said Red Cross was arranging a certificate of appreciation to be presented to FLK.