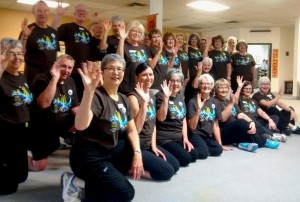 On Thursday June 9, 1200 seniors and seniors-in-training gathered at 12 locations stretching from St. John’s, Newfoundland, on the east coast of Canada, to Victoria, British Columbia, on the west coast.  The distance between these two cities spans 7400 kilometres as the proverbial crow flies, includes two ferry rides, and covers five time zones.Planning for the first Cross Canada Seniors Day began following CIT week 2015.  National Seniors Committee members, who typically meet face-to-face only once a year, stayed in closer touch throughout 2015-2016.  Members of regional and branch seniors committees joined in the planning.A t-shirt design was produced, with 2700 participants placing orders for the shirts.  These were delivered across the country in May – in perfect time for the special event.   A video link was planned, tested twice – and once more for good measure.  Excitement grew from coast to coast.Finally the big day arrived.  Reports from regional centres are still coming in.  Here are a few early comments.  “We felt a better sense of belonging”,  “we loved doing the foundations together”, and “the video portion was well done”.   Everyone contributed to the success story.Stay tuned for 2017!