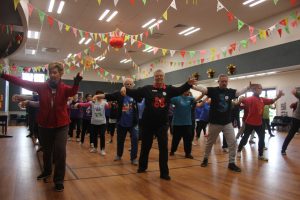 At 37 years young, I am what some would consider “broken” (for my age).

A physiotherapist (one of many), whom I had a long-standing relationship with after a ruptured disc in my early twenties, described me as a patient whose body tenses easily with an inability for my muscles to release or relax – often resulting in increased risk of injury and pain.

I have had issues with pain since my very early teens.  I have struggled with stress management and chronic pain, to some extent due to postural issues, and numerous injuries (including; pinched nerves, a ruptured disc, compressed nerves, sprained shoulder and ankles, neck sprains, partially dislocated ribs, lower back pain and more, and neural pain).

In my early 30s I partially tore my TFCC (a complex group of ligaments in my wrist), resulting in years of pain and a huge amount of anxiety and stress due to a battle for surgery.  Recovery has been a long process with surgery only carried out in March of last year and nerve bruising to the ulna nerve resulting from the anesthesia.  I also experienced a lack of mobility and fear of exercise for fear of injury.

I was brought to Tai Chi when I was at a low point, feeling at a loss in terms of how to get my body moving again.  On top of this we’d just moved in with family, my children were adjusting and I needed to do something to get moving again.

I came across a connection I knew participated in Taoist Tai Chi® arts and the following day I walked into my first class; I was greeted by the instructor who made me feel at ease.  I “commenced” and now I can’t stop. Since then I attend anywhere between two to four classes a week and practice what I can at home.  I attended a local workshop and gained a lot of information from that.

In July I attended the International Programme in Tauranga, New Zealand, after approximately 9-10 months of Taoist Tai Chi® practice. I went in with an open mind and willingness to soak in everything I could “as a human sponge”.

When I arrived on the first morning I had a severe headache and chronic neck pain, a sprained ankle and general pain in my back and legs.  By the end of the first day I was starting to feel an opening up or lengthening of my upper spine (neck and shoulder areas) as a result of instruction given.

I woke up on the second day and had NO pain or tension in my neck or upper shoulders — a feeling I couldn’t remember having. I started to experience lengthening and opening of parts of my body in a way I had not experienced before; adjustments the instructors made to the set resulted in more and more internal feeling.  I began to let go of worry and focus on the feeling (two key lessons incorporated in the programme).

As the programme progressed and our collective and personal Tai Chi practices began to bloom like lotus flowers, my body started to feel amazing!  The feeling was euphoric. By the end of a set I was so relaxed from the moving meditation that I felt a release of tension I had not experienced, my mind and body were like jelly, clear of worry and soft and calm.  At one point I even forgot I had arms as they flowed through the moves without me consciously controlling them; I turned the spine and they followed. I didn’t over-think it — I was just in the moment focusing on the feeling of release and movement internally.

By the final day of the programme I felt elated, I was pain-free over my entire body.  I felt free of worry and excited to take away what I had learnt at the workshop. My mind was calm, my body was calm.

The programme was enlightening and brilliant.  To have such an experienced instructor and assisting instructor; and to be surrounded by fellow Tai Chi enthusiasts, all of whom shared in creating a warm, caring, vibrant environment to further our Taoist Tai Chi® arts journeys.  It was the most wonderfully packaged gift my mind and body could have ever received.

Now, two weeks on, I remain pain-free in my neck and shoulders; my head floats in a relaxed state on my neck.  My lower back and wrist are great (also confirmed by my physiotherapist) and I continue to practice the skills I learnt at the workshop.

I am looking forward to continuing my Taoist Tai Chi® journey and attending as many programmes as I can.