A hard-hat tour through the Fenway Hotel in Dunedin, Florida, this week in anticipation of the boutique hotel’s opening in October has generated several stories in the news media, including the Tampa Bay Times, Bay News 9 and ABC Action News.

The role of the Taoist Tai Chi Society of the USA in preserving the heritage building was also widely acknowledged.  The Tampa Bay Times reported: „At one point in the last five years, it seemed most likely the historic building at 453 Edgewater Drive would just be razed. But in 2014 the Taoist Tai Chi Society of the United States of America bought the site for $2.8 million. The non-profit partnered with [Joe] Collier’s Tampa company, Mainsail Lodging and Development, which will run the former jazz hub as a franchise of Marriott’s Autograph Collection.” Joe Collier, Mainsail’s president, said the new Fenway will offer a „look back at the old days but with a modern feel”.

Once the more than $11 million project is completed, the Fenway will have 83 rooms, and a rooftop bar, the Hi-Fi,  with views over the water — all the way to Caladesi and Honeymoon Islands.

The Times added: „The hotel developers have embraced the hotel’s history as part of the experience they’re selling. Collier pointed to a space that would become a stage for live music in the lobby — dirt outside that would become plush grass for croquet games.”

The Taoist Tai Chi Society of USA will hold the grand opening of its new International Centre next to the Fenway Hotel on November 3.

Watch the Fenway hard-hat tour at these news sites: 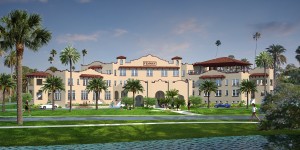