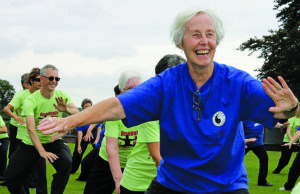 Tai chi might be a useful way to introduce reluctant people and heart attack survivors to exercise, according to a small new study published in the Journal of the American Heart Association and reported by Time.

The dietary and exercise changes that doctors recommend to people after heart attacks are often too intimidating and frightening for many patients.   Dr. Elena Salmoriago-Blotcher, assistant professor of medicine and epidemiology at Brown University’s Warren Alpert School of Medicine & Public Health, wanted to find an alternative for people like this, says Time.

In the study, 29 men and women who had recently had a heart attack were randomly assigned to two tai chi groups. One practiced tai chi twice a week for 12 weeks by attending sessions at the hospital, while the other group did it three times a week for 24 weeks.

After three months, Salmoriago-Blotcher found that the people in the group doing tai chi more frequently were more physically active than those doing less of the exercise. After six months, the differences were more pronounced. Not only were the people in the more intensive group practicing tai chi more often, but they were also doing more physical activity outside of their sessions, such as riding their bikes and climbing up and down stairs in their homes that they were afraid to use before.

Salmoriago-Blotcher is hoping to study tai chi further in heart attack survivors by upping the intensity and seeing, through heart rate monitors, if that helps improve their physical fitness. If it does, then tai chi might be on its way to being an alternative to the treadmill as a way to improve heart health, says Time.