In the biggest and most rigorous study yet of tai chi and fibromyalgia, scientists led by Dr. Chenchen Wang, director of the Center for Complementary and Integrative Medicine at Tufts Medical Center, and her colleagues studied a group of 226 people with fibromyalgia for a year. For the first 12 to 24 weeks, they randomly assigned the volunteers to a currently recommended aerobic exercise regimen, or one of four tai chi sessions.

Time magazine reports that Wang found that while all of the people reported fewer symptoms at the end of the year, all those in the tai chi groups reported more improvement in their symptom control than people in the aerobic exercise group after 24 weeks. And among those assigned to a tai chi regimen, people who practiced tai chi for a longer period of time showed greater improvement than those who did it for a shorter period.

“We think our results suggest that physicians should think about what type of exercise is best for their patients with fibromyalgia,” says Wang. “We found that tai chi was more enjoyable [for patients], there was a social connection and they could practice it at home by themselves with their family and friends.”

While it’s not clear what causes chronic fatigue, doctors believe that being physically active can improve blood flow to the brain and body and may relieve a variety of symptoms, from depression to pain caused by inactive muscles and joints.

Wang told Time that tai chi may therefore be particularly useful for people with chronic fatigue, since it involves both the mind and body. 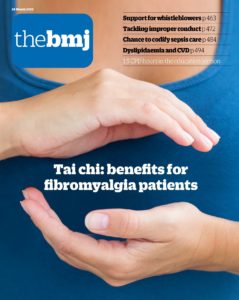