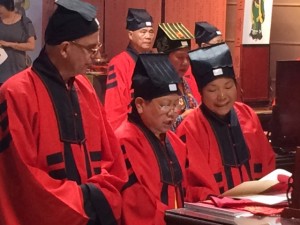 East and West have joined together harmoniously with the Grand Opening of the Wong Dai Sin Taoist Temple at Steeles Avenue in Toronto, Canada.

Special guests brought good wishes and congratulations, with one describing the new temple as a “truly wonderful addition” to the region.

Fung Loy Kok Institute of Taoism international president Marsha Eberhardt reminded us that our founder Master Moy Lin Shin wanted the light of Fung Loy Kok Taoist Tai Chi to shine in every village and community in the world so that everyone who sees that bright light can join the path of deep learning and transformation if they wish. She believes the Wong Dai Sin Taoist Temple is a very bright light.

The Wong Dai Sin Taoist Temple represents the heart and soul of our Taoist tradition and is our gift to the community. Fung Loy Kok Institute of Taoism intends the temple to be a place for all who wish to benefit from the practice of the Taoist arts and to be a way to spread Taoist immortal Wong Dai Sin’s spirit of compassion, sincerity, and perseverance.

Architect Brigitte Shim, responsible for the building’s striking marriage of a modern structure with Taoist temple tradition, said it had been “an amazing journey with your vital community”. The elevated one-storey, flat-roof temple liberally clad in rusted red steel is supported by seven sets of columns to allow for parking spaces and circulation beneath the structure. Inside the building large geometric lights shine down on the fittings of the temple and the Memorial Hall.