To celebrate the 149th anniversary of the founding of Canada over 40 joyous practitioners of Taoist Tai Chi® arts took part in the grand parade during Port Credit’s annual Paint the Town Red event on July 1st.

This is the second year we have paraded our 22-person dragon to the delight of young and old alike.  To prepare to parade the dragon we attended training sessions held monthly at The International Centre outside Mono, Ontario.  Besides parading the dragon we performed some energetic maneuvers all along the 1.5 km (∼1 mile) route.  After performing our last spiral display, Mississauga’s Mayor Crombie and her predecessor, Hazel McCallion, both took the time to pose with our colourful dragon, as shown below. 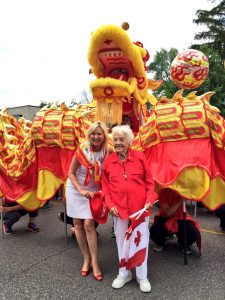 While there were storms before and after the event it did not rain on our parade.  Afterwards we went back to one of our locations in Mississauga to enjoy a feast and replenish after the occasion.

We are grateful to all those volunteers who organized and participated this year and we are sure to be welcomed back again next year.  Before then we look forward to enlivening the dragon at future events, including International Awareness Day next month in Toronto.  Come join us to be a dragon leg or to enjoy the spectacle and to promote Fung Loy Kok Taoist Tai Chi!